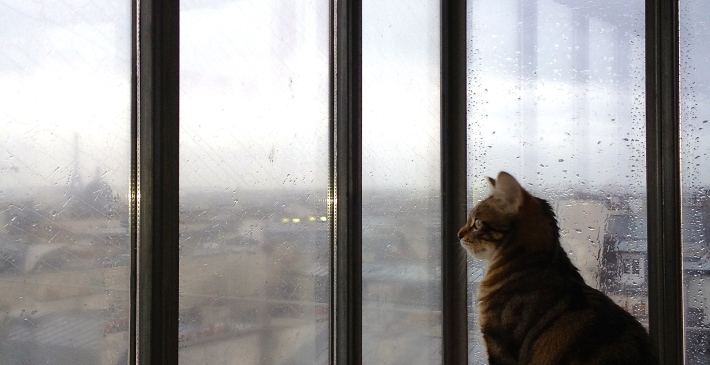 The great communicator, Monkee, looking for birds. She’s learned to associate a bell with being fed.

Did I mention we now have a piano in our home? Both the woman and the boy are taking lessons. I took lessons from about ages 5-11 when I gave it up for lack of…talent.

I tried to continue when we moved from Connecticut to Ohio; I asked my instructor if I could play a genre of music other than the stock piano-student classical pieces. That plan did not stick. Maybe a different teacher might have brought different results but, even then, I sensed I was not the right person for the part.

I do still play — in a manner. If I could be a lounge singer I would, playing with a whisky and cigarette close at hand. I do enjoy laying it on thick with the vocals. Lately I’ve been sitting on the bench working out the details of songs I sang for the boy when he was a wee one.

These include such classics as Redbird, The London Bus, Truly Drooly, and Herr Gübermann. The last one is my favorite, a story of a crocodile that wants to play with children but spoils everything when he eats all of his playmates. The London Bus runs a close second, having in it a reference to a “great big thong.”

So there’s that cat. She, like the dog of Pavlovian renown, associates dinner time with a bell. This happens to be the result of a 21st century crutch of mine: the Due app, which I use to keep on schedule during the day. Without it, I’d be the parent who forgets to fetch his son from school, never mind take him.

At this point I don’t need the app to remind me to feed the cat when I am home. Away from home, the bell checks preparedness — will we arrive at the apartment to a very hungry cat?

If I am home and the cat is near when the bell rings, she knows it is time for food to appear in the bowl: she perks up, looks my way, or trots to the kitchen in anticipation.

The morning bell is different. Whether I am asleep or awake, she will make clear my responsibility: her first strategy is to sit upon me, then comes a gentle tap from her paw to my head, usually the nose; sometimes a lick, or, if I am particularly slow to respond, a nibble on a finger or my hair.

Recently, being awake in a wee hour, I moved to the sofa to read and, as 6 am approached, tugged tighter on my wooly throw and closed my book and eyes. Dozing, a paw tap came 30 minutes later.

The result of the tap registered as clear as a bell. And there she was, perched on the piano bench, having touched not me, but instead a single piano key. It was breakfast time.